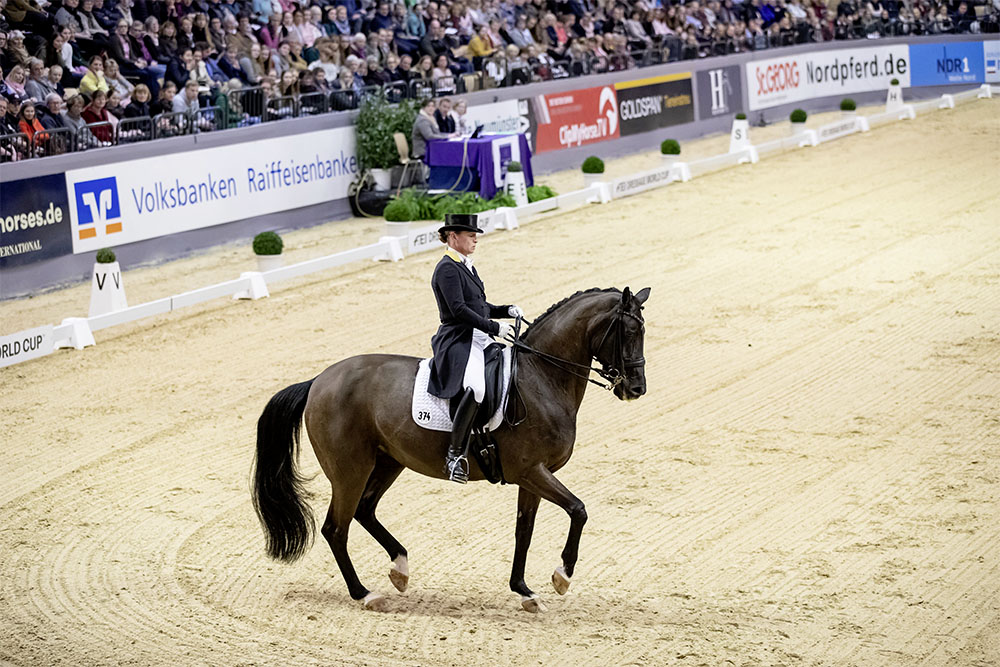 16 Feb Pure delight for “W and W” – Weihegold and Werth

(Neumünster/ Germany) Title holder Isabell Werth from Rheinberg has taken a huge first step forward in the ninth qualification station of the FEI World Cup Dressage. The rider from Rheinberge won the Grand Prix de Dressage – the Madeleine Winter-Schulze Prize – with her 14-year-old mare Weihegold OLD with a phenomenal score of 82.56 percent, and was utterly delighted with “Weihe”, as the smart, dark beauty is simply known. She gave it her absolute all, enthused the world’s most successful dressage rider, adding: “The test today, the atmosphere and the number of spectators really highlighted the fact that the Grand Prix in its  traditional form is just right and needs no shortening.”

The older, the better
The competition tried everything. Helen Langehanenberg from Billerbeck piloted her 17-year-old horse Damsey FRH into second place, and expressed how comfortable the horse felt in the Holstenhalle, and what a good feeling it was to have secured second place behind Isabell Werth and Weihegold: “It is almost like winning.” Irish rider Judy Reynolds, who lives in Dorsten in Westphalia, also had good reason to celebrate, coming third with her 17-year-old KWPN gelding Vancouver K and relegating team world champion Dorothee Schneider from Framersheim to fourth place. “It seems to be the case with Damsey”, emphasised Reynolds, “that the older and more mature he becomes, the more he grows and achieves.”

Helen to start 15th in the Freestyle
The top trio were also paying close attention to the draw for the starting order for the FEI Dressage World Cup in the Grand Prix Freestyle (the VR Bank Neumünster Prize) on Sunday from 10.00. Nars Gottmer from the Netherlands will open the race for World Cup points in the ninth of ten qualifying stations in Neumünster on Sunday. Helen Langehanenberg is 15th – the final competitor in the competition. The FEI Dressage World Cup will be broadcast in a live stream by the FEI at www.feitv.org.

“BEMERed and victorious” – Max Haunhorst at the VR CLASSICS
Just before the Neumünster Championship, presented by BEMER Int. AG, the winner tried out the BEMER product. Max Haunhorst from Hagen a.T.W. won the championship with ten-year-old OS mare Chaccara from Chacco-Blue. The 18 year old managed even to beat world-class rider Rolf Göran Bengtsson and Oak Grove`s Carlyle’s time by a split second in the final round of the world-ranking jumping competition.

Two for the price of one
“We tried out BEMER’s blankets and promptly bought one”, divulged Max. “I obviously had no idea that I would win – and now we have two!” BEMER are renowned for physical vascular therapy for both people and horses. The BEMER’s Veterinary Line enjoys a great deal of popularity. For Max Haunhorst this is his first time competing at the VR CLASSICS in Neumünster. “I’m really pleased I got to compete here, at a tournament with such good conditions”, said Haunhorst looking gratefully at organiser Paul Schockemöhle. He was particularly pleased as Haunhorst’s mare Chaccara is a daughter of his Mecklenburg stallion Chacco-Blue, who since 2017 has held the top spot in the world ranking list of jumping horse sires. Schockemöhle was reluctant to plump for a favourite for the Volksbanken and Raiffeisenbanken Grand Prix on Sunday (from 13.45): “We’ve seen today that there are at least 20 riders who could win here. The Grand Prix is a whole different kettle of fish and we have a mix of good young riders and old hands.”

Like father, like son
One of these “old hands” was wearing a mischievous grin. Rolf-Göran Bengtsson had no complaints about young Haunhorst’s win. “He had to give it a shot, and he did it. It was very, very close, but he did enough.” Bengtsson was riding a horse sired by Casall, a Holstein stallion with whom he is inextricably linked. “He has the prudence of his father”, said the Swedish rider – who lives in Oelixdorf – of the eleven-year-old Holstein gelding.

Success right from the get go
Quintair and Tobias Meyer (Benstrup) have only been a team for ten days. “Alexandre Onyshenko called and asked whether I wanted to ride the horse”; said Meyer, who came third, “so I went with my boss and we tried out the horse. I could only do two or three rounds of the course with him for now, but this is a horse who has the potential to do a lot more.” It is for this reason that Meyer does not plan on riding the Quintero offspring in the Volksbanken and Raiffeisenbanken Grand Prix: “He is nine years old – we have to think of the future and not want too much too soon.”