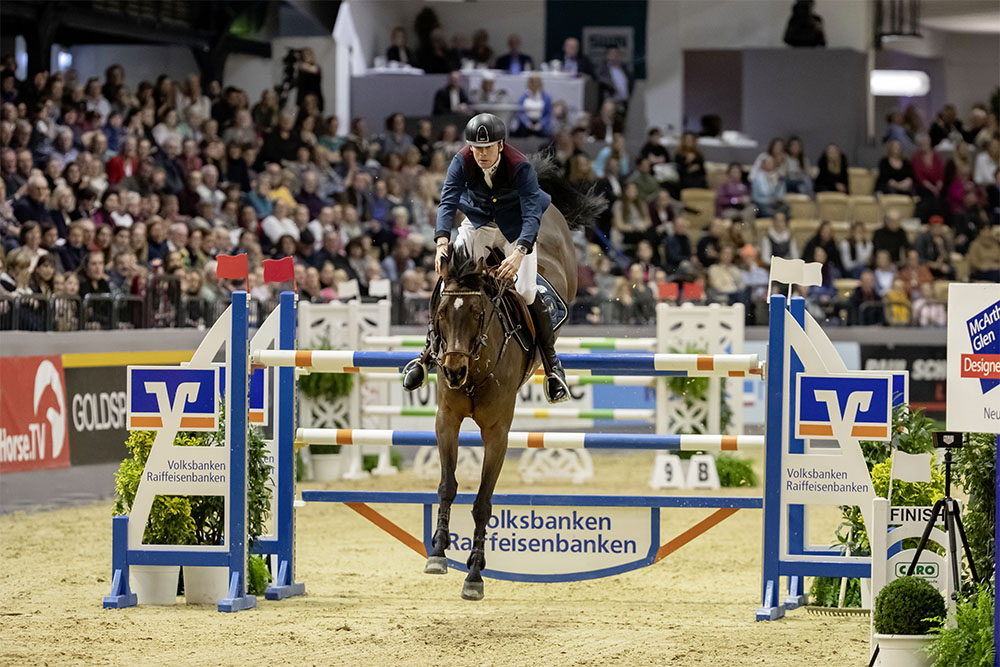 (Neumünster) It was a secure victory, a well-deserved and jubilantly-celebrated win: Isabell Werth won the qualification competition for the FEI Dressage World Cup – the VR Bank Neumünster Grand Prix Freestyle – at the VR CLASSICS in the Holstenhalle in supreme style with Weihegold OLD with a score of 86.81 percent, and found herself “conducting” the entire Holstenhalle during her lap of honour. There were standing ovations for the 14-year-old mare and her world-famous rider…and the lap of honour was the icing on the cake for everyone in the hall – the beloved Werth Faust became a crank handle, one hand on her ear as though she couldn’t hear enough noise from the crowd, and with a piaffe-ing Weihegold she demanded more – more applause, which the spectators were only too willing to provide. No-one celebrates a lap of honour quite like I.W. if everything has fallen into place – the horse’s form, the result and the mood.

Top form sparks huge enthusiasm
It was Isabell Werth’s ninth win in the World Cup Freestyle in Neumünster and she enjoyed it immensely. “Weihegold was on great form – very focussed, at one point a little bit quicker than me but that’s just something I have to keep in check”, said the double World Champion and defending champion in the FEI Dressage World Cup. She continued to note that everything that happens in Neumünster only serves to highlight just how important the World Cup is here, and the level of enthusiasm the spectators hold for dressage sport.
And there were indeed thousands of spectators glued to the action in the qualification Grand Prix – there wasn’t a spare seat in the house on Sunday as the 15 best pairs battled it out in the VR Bank Neumünster Prize. “Over the course of the many years of the tournament here we have not only got to know very nice winners, but first and foremost riders who are genuinely approachable and down-to-earth”, highlighted Dirk Dejeweski, Director of the VR Bank Neumünster, “and that is what we are like as a business too.”

Run on the final continues
Behind the record winner came Helen Langehanenberg from Billerbeck with Damsey FRH (83.82), who even at 17 years old trotted through the Holstenhalle looking fit and full of beans. “At one point I risked a bit too much”, summarised Langehanenberg, “but – if you don’t take risks you’ll never get ahead. Now it’s onto s`Hertogenbosch…” With 71 points Langehanenberg took the lead in the Western European League of the FEI World Cup Dressage, ahead of Dorothee Schneider (Framersheim) and Benjamin Werndl (Aubenhausen) – Schneider having achieved 70 points and Werndl 68. For Judy Reynolds from Ireland the World Cup start in Neumünster was another step in the direction of the World Cup final with Vancouver K (82.75). The Irish rider who lives in Dorsten is planning on competing in the tenth qualifying station in the Netherlands in March, just like her German competitors. Kathleen Keller from Appen also did herself proud with San Royal in the FEI Dressage World Cup.

Swedish power generates win in the Volksbanken and Raiffeisenbanken Grand Prix
47-year-old Peder Fredricson from Sweden has won the Volksbanken and Raiffeisenbanken Grand Prix at the VR Classics. With Christian K, a Dutch gelding, the Olympic silver medallist exhibited a textbook round in the jump-off of the world-rankings test. “That was world-class sport we witnessed here today,” said Paul Schockemöhle, paying tribute to the top trio. It was the first time in many years that there were no German riders amongst the top five in the Grand Prix.

Schockemöhle attests top sport
“In any other tournament ground in the world you might have got one in-between, but no more than that”, Schockemöhle put forward without uncertainty. Fredricson was resoundingly celebrated – he is, after all, a well-known man in ‘Horse Land’. Many years ago he spent some time in the stables of horse breeder Harm Thormählen in Kollmar. “That was a super time, a great job, great people”, recalls Fredricson with bright eyes. “Everyone loves the tournaments where you always win”, admitted the Swedish rider with a glint in his eye, “but that was actually only my second time competing here. I’ve actually been here more often as a spectator – on the lookout for good Holstein horses.”

Comeback for Carambole
Carambole celebrated something of a comeback in the Holstenhalle. The 15-year-old Holstein stallion came second with Dutchman Willem Greve in the saddle. “Carambole was licensed here in Holstein, in this very hall, and then I rode in the Youngster Tour with him here”, said Greve, “And if it works out, we’d like to come here again next year.” Albert Zoer was also delighted with his third place spot with Zirocco Blue offspring Florian. “I have several young horses and have recently been at tournaments in Belgium and the Netherlands”, said Zoer, who has been familiar with the VR Classics for many years. “Familiar, comfortable and a fantastic audience” – that is how the 2006 Team World Champion characterised the international tournament in the Holstenhalle. Top-placing German, in sixth place, was two-time Derby winner Nisse Lüneburg from Hetlingen with Luca Toni, a horse owned by Wolfgang Herz.

Continued growth for VR Classics
2019 has seen yet another year of increased visitor numbers for Paul and Bettina Schockemöhle. Around 38,900 guests came during the four days – almost 400 more than in 2018. This increase was limited to the Thursday and Friday evening. “Saturdays and Sundays can’t get any fuller,” confirmed Paul Schockemöhle without hesitation, “the halls are always full then – you can’t be more than sold out”. Grandorado TN and Willem – sh:z Youngster Final Willem Greve from the Netherlands was in raptures when he spoke about the youngster competitions at the VR CLASSICS. He received the congratulations of acting editor in chief Jürgen Muhl with great delight as he claimed victory in the Youngster Final presented by sh:z. Greve won the international two-phase jumping competition with stallion Grandorado, whose grandsire is Holstein stallion Carolus I. “Grandorado was runner up in the young jumping horse world championships, and he is also renowned for the Holstein breed”, said Greve. “When he’s a couple of years older, then he’ll be seriously good – he can do it all.”